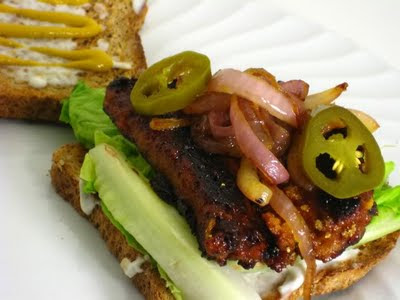 I think Andrew and I come off strange to a lot of people. Many Friday nights are spent at the track, running, while everyone else goes to bars and drinks the week away. When we do go out, it's often to coffee shops and movies and great restaurants. Which isn't so abnormal, but we go to vegan spots, get soy lattes, and sometimes see independent films and that's odd to people. When we have office lunches, I often don't go or if I do go, I just don't eat. Andrew is a magician-- as awesome as that is, I think many people don't understand why someone with a Journalism degree becomes one. I was on my way to becoming a dentist, but I gave that up to be anything else. A cook, a painter, I'm still really not sure. I got married when I was barely 20 to a guy I knew all but a few months.

But of all these strange, alienating things, I think being vegan is the most bizarre to people. It makes it hard to go out to dinner or do most anything with people who aren't vegan. Whenever there's huge family events, I'm often stuck in the kitchen getting in every one's way making a whole separate meal for Andrew and me. Sometimes we just eat before, and show up after everyone else eats.

I think this is every one's story, too. Making any huge life change completely throws your routine off. And while surrounding yourself with supportive, like-minded people is ideal, it's not always possible to trade in your friends and family for "better" ones. I think that's why I started this blog. Beyond the fact that when I first moved to this city I had no job, no friends, and not much to do-- I was also a new vegan. I wanted to get help from other vegans and give it back.

With that, I give you an almost insultingly easy... I won't call it a recipe, but a sandwich idea. I used to never be able to eat a sandwich without cheese. I just wouldn't. Now I just try to top my sandwiches with more exciting delicious flavors.

[[BBQ Homemade Seitan Sandwich]]
Make seitan at home. I swear to you it's easy. You can find vital wheat gluten and soy sauce at whole foods. That's pretty much all you need. That way, you can have nice slices of seitan instead of large chunks like they come in the box.

--Slice the seitan about 1/4 inch thick. Cook each side about 2 minutes in a pan with some olive oil. You can even bread it a little to make it extra crispy. When both sides are crisp, add the BBQ sauce to coat. Cook each side another 2 minutes.
-- In another pan, add a little oil and some 1 inch long slices of red onion. Cook until soft and translucent.
-- Toast two pieces of bread. Add a little minced garlic to some vegenaise -- a little goes a long way. Spread on one side. The other slice, add the mustard. Lay some romaine, then the BBQ seitan, then the grilled onions, then jalapenos, and you're done.
Posted by Unknown at 9:19 AM

Hi, This looks like a wonderful sandwich. I've been vegetarian for about 25 years...I'm not vegan, but I can relate to the difficulties related to socializing and eating with people who eat differently than I do. Good luck with everything! ; )
Peace, Stephanie

At the moment we're try to get the government in Taiwan to organise an official meat free Monday nationwide.
It's for this reason that we've set up a petition, we need as many people to sign it as possible.
Could you please sign and spread this petition to as many people as possible. Here's the link

Any help would be great.

I agree with you about the family gatherings. The July 4th was a little awkward for me at a huge family gathering because I've only been vegan for close to 3 months and they all think it's just odd. On the plus side, my parents have switched to non-dairy milk because of my example so the lesson there is just keep a positive attitude and a few of them may come around.

I was also thinking about making an amazing vegan brownie recipe that I think is from the ppk and taking it to work tomorrow. It's like everything you do is as a vegan ambassador.
You're doing a great job and your blog is one of my favorites. Thanks, Ursula (also in Columbus)

Hey Ursula -- Thanks for the thoughtful words. Congratulations on impacting your family -- I don't think I could get anyone in my life switch milks. haha

Let me know how the brownies go over. I've never had much luck with vegan brownies.

I often feel like a misfit among misfits as I'm vegan first and foremost for the health of it and it seems like most vegans are in to avoid animal creulty.

Love your blog, you are definitely helping this new-to-columbus vegan!

Hi Tracy,
I didn't get a chance to make those brownies so maybe this weekend I'll try again. I have made them before and they were better than any brownie I have ever tried. Like something from a restaurant!
Here is a link to the ppk recipe
http://www.theppk.com/recipes/dbrecipes/index.php?RecipeID=161. It's the first choice if you search brownies at their website. They only change I made was to add chocolate chips to the batter just before baking.
Have a good week,
Ursula in Columbus

hi tracy - your weekends sound like debra's and mine! we can certainly relate to your experiences with family as well. i try to use those times as a forum (because someone always asks) to talk about veganism and make it appear easy... ordinary... which i hope someday it might become. that seems to create a welcoming environment for more questions! peace and good luck with the burger thing tomorrow, doug