So, with only two left over enchiladas, I needed to make a side-- and sort of pick up the pieces and try again, since my Spanish rice was an abysmal failure last time. I'm pretty sure it would have worked out last time had I used minute rice and boiled that in vegetable stock -- but I work 8 hours a day, and come home at 5:30. If a dish fails, I just have to dump it out and try next time I get time. I can only cook a couple times a week-- it's exhausting living the dream and working full time. :)

The first time I tried this, it wouldn't cook. Traditionally with a Spanish Rice, you fry it in oil, boil it in stock, and add a little tomato paste and seasoning. It just wouldn't cook though. No matter how much stock I added, it would just boil out and the rice would stay hard. I decided to work around that this time. 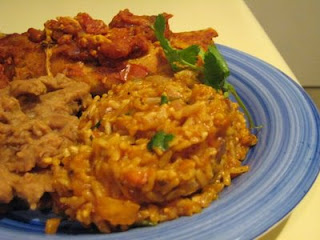 This recipe is pretty kick ass. It's flavorful and healthy, which are my two favorite things... kind of. I don't measure things, so these are a rough guess. I under guess, so you may need to add more. Use your best judgment.

*Go ahead and cook the rice as the instructions tell with water. My bag cooks for an hour. I pulled it out a few minutes before I thought it was ready, and drained it. Then, I heated some EVO, and sauteed the onions, garlic, and jalapenos [[I seeded the jalapenos, scraped out all the white stuff, and chopped them with gloves on]] for a minute. Then, I added the cooked rice, and fried it a little. I added the no-chicken broth, tomato paste, and seasonings, and I cooked it about 10 more minutes. Once the rice was fully cooked through, I chopped some fresh cilantro and stirred it in.

It's a really good, simple dish. Not cooked traditionally, and much healthier with the brown rice instead of the traditional white rice. I hope you have enough time in your day to try it.

On an awesome note, our co-worker Courtney is trying out On The Fly tonight with her friend Drew thanks to the helpful guidance of the ever-persistent Andy and I. She's vegetarian and I believe her friend isn't. So, hopefully she loves it. Yay vegan restaurants!
Posted by Unknown at 9:30 AM