The Ad That Launched a Thousand Ships 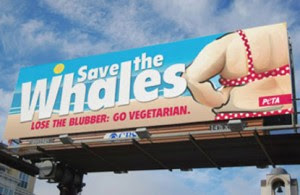 PeTA has a new billboard that says "Save the Whales Lose the Blubber: Go Vegetarian".

My first reaction, as most people may have, is "That's hilarious!" Upon further reflection, I think "That's fucked up!"

But now I'm sort of stuck. This ad has launch dozens of debates today about "sizeists" (well, mostly I've been called a sizeist for thinking obese people are unhealthy). And while I still think being over-weight is bad for you, I don't necessarily think this ad is right. Is PeTA incapable of not exploiting SOMEONE to help animals. Usually it's using female sexuality, and now it seems they're targeting the morbidly obese (and the female morbidly obese mind you).

Anyway, you can't deny that their marketing is effective, but does it bother any of you? Everyone seems SO angry about this ad. Are there any overweight people out there not completely offended by this? If you are offended, can you deny that being overweight is unhealthy?
Posted by Unknown at 4:27 PM

* Cardiovascular disease (mainly heart disease and stroke) - already the world's number one cause of death, killing 17 million people each year.
* Diabetes – which has rapidly become a global epidemic. WHO projects that diabetes deaths will increase by more than 50% worldwide in the next 10 years.
* Musculoskeletal disorders – especially osteoarthritis.
* Some cancers (endometrial, breast, and colon)." http://www.who.int/mediacentre/factsheets/fs311/en/index.html

"Overweight and obesity are major risk factors for a number of chronic diseases, including diabetes, cardiovascular diseases and cancer." http://www.who.int/topics/obesity/en/

Thanks, World Health Organization. You state the (seemingly) obvious. Then again, maybe not everyone agrees with the international non-profit that serves as an authority on human wellness.

You really don't see what's wrong with that ad?!? Number one, it's PETA once again objectifying a female. Number two, it's making the assumption that anyone who is fat would automatically become skinny by going vegetarian (because dear lord don't use the term you really mean...just say it...VEGAN!). And number three, it's promoting "vegetarianism" as a diet fad! That does nothing for the animals! But then again, PETA is a bunch of welfarist assholes, so they don't dig much deeper than the surface.

PETA hurts our movement. All they do is offend people or come across as lunatics ("Sea kittens" anyone?) I'm a vegan (and I'm sure not skinny) and I fucking hate PETA!

I hear there's also an ad running with a male in a bathing suit. So it's not just objectifying a woman.

And while I agree that going vegetarian is not always going to make you skinny [[I gained 25 lbs!]], I do think if done correctly, it can be a really effective mode of weight loss [[like Andrew and I are doing now]].

Isn't it more important to spread vegetarianism and veganism? I know marketing it as a fad diet is not exactly ideal, but in the end -- doesn't it decrease animal cruelty and help the environment?

In the end though, I do agree that it would be nice if we could just say "vegan" and if we could just convince people logically that veganism is the way to go. When you're marketing for the masses, you have to go with the lowest common denominator, unfortunately.

Thanks for your thoughts.

First, if nothing else, please check out these pics of real people and what they are labeled as according to the BMI:

most people have a misconception about what "overweight" and "obese" actually look like. Weight, BMI and height is listed. These pictures are why people go berserk when they are told that "overweight" means they probably stuff their faces all day while sitting on the couch...

"I hear there's also an ad running with a male in a bathing suit. So it's not just objectifying a woman."

Do you have a link with that? If they are coming forth with an ad targeting men it would certainly add to the discussion... I hope it has a funny tagline referencing erectile dysfunction and how veganism can fix it, maybe:

Save The Pigs! Carrots Help to Keep It Hard!

Because after all, a healthier body means a healthier penis, it is part of the body, and when men lose their pubic fat then their penises will gain an length.

Would telling men who eat meat that compared to veg*ns their penises are inferior be the best way to convince them to give up meat? Or would men just get offended at that?

PeTA is Evil. They've killed over 20 thousand domesticated pets entrusted to them. The founder is a lunatic.

What marketing have they tried that WASN'T offensive to some group or another? Women half naked - I suppose to convince men that vegetarianism is sexy, because marketing to MEN is always more important than marketing to WOMEN - Racially insensitive signs hung at the Mexico Border, etc... Why would anyone be swayed by such tactics? Have you ever seen PeTA run ads depicting images of food, tasty food, the way you have here on your blog? Or have they ever run commercials showing people enjoying some yummy vegan meal? It's ALWAYS something outlandish and offensive to someone.
__________

And if PeTA really cares about animals sooooooooooo much, why do they kill the vast VAST majority of the domestic pets that people surrender to them each year? They have a budget (from donations!) of 30-something MILLION dollars a year - My Lord! - the things they could do with that money if it wasn't all being spent on billboards and magazine ads and freezers to store dead pets in.

PeTA "took in" 2,216 dogs, cats, puppies, and kittens and KILLED all but 7 of them. Seven. I think about the people who lost their homes in the housing debacle, and who may have had to give up their pets, and they thought the most caring – unkilling - place would be PeTA, so they entrusted People for the Ethical Treatment of Animals to find their animal a good home... and PeTA just kills the pet instead. What is that about?

http://www.petakillsanimals.com/downloads/PetaKillsAnimals.pdf << PDF of documents peta submitted to the Virginia Department of Agriculture and Consumer Services.

You should read up on what PeTA does, not what it SAYS it does, because people have valid complaints beyond the offensive ad campaigns.
__________

And I highly recommend this blog for it's scathing feminist takedown of a thing called a "rattlesnake roundup"
http://blog.iblamethepatriarchy.com

BMI: This is something that has really bothered me for some time. It really doesn't take into account body fat %, which I think alters this scale. If I'm a muscly individual, I may come off has "over-weight" on the BMI scale. We really need to reform the way we define weight.

However, once you get into the "morbidly obese" range on that link you sent, that girl looks very unhealthy. And it's the type of "over-weight" we're talking about. That's when you start getting health complications and should worry about your life.
------------------

"What marketing have they tried that WASN'T offensive to some group or another?"

A lot of their marketing is pretty offensive. That one with Che Guevara's granddaughter? (http://foolocracy.com/2009/06/che-guevaras-granddaughter-poses-semi-nude-for-peta/) It's offensive to her grandfather that she did that, and like you said, using sex to market to men is pretty degrading. I'm not a huge feminist, but I don't agree with objectifying women. (although there are several ads with men depicted partially naked, it does seem to be mostly female naked ads)
------------------

"Women half naked - I suppose to convince men that vegetarianism is sexy, because marketing to MEN is always more important than marketing to WOMEN"

From a marketing standpoint (and this is purely based on speculation), it does seem harder to get men to go vegan. They see it as "weak" and less manly. And generally, a lot of woman see killing an animal as disgusting and wrong, whereas men are more conditioned to like that sort of thing. So, it may be "smart marketing" to gear their ads towards men.

If they want to use sex, they can do it more tastefully, though. Remember that Carl's Jr. ad with the attractive model (FULLY clothed mind you), working in her office, eating a really messy cheeseburger? And the construction guys outside seem like they're checking her out, but it's really her awesome burger? That's smart. And they have a woman in a real life, normal person setting. Not some strange male fantasy.

Alas, maybe to compete with PeTA, they've skanked up their marketing. Using Paris Hilton, half-naked washing a car (which was pulled from air). Or a girl slowly riding a mechanical bull.

As far as PeTA killing animals goes, I've always waffled on that. Pet overpopulation is a huge problem. What can you do with the millions of pets that have no homes? The spay and release program is one I like a lot, but apparently people don't like strays running around their neighborhoods.

Anyway, thanks for your comment, again. I wish I could find the male version of that ad, but I only know based on what I heard some commenter saying. I'll keep an eye out for it though.