The thing that really irritates me about Andrew is that he's good at everything. It's unfair. He's just one of those people who's done everything and can do everything. And recently, he's taken it upon himself to invade my realm of pseudo expertise, cooking. After our excursions in the East [[the East being NY and Philly]], we've been really craving Thai curry all the time. So, I suppose in an attempt to create vegan thai food [[they use a lot of fish oil]], Andrew consulted VwaV and made Isa's Thai Green Curry. He used reduced fat coconut milk [[because who needs a weeks worth of fat in one sitting?]] and added some broccoli. Mostly because we had some in the fridge, and we love broccoli.

It was pretty excellent and I have to say, I'm impressed with the huge task of making curry that he took on. It's not like he slapped some simple stir fry together. He made a chili paste and fried tofu excellently, and made substitutions where he thought fit. I don't know when we'll make this again, but I enjoyed it thoroughly. 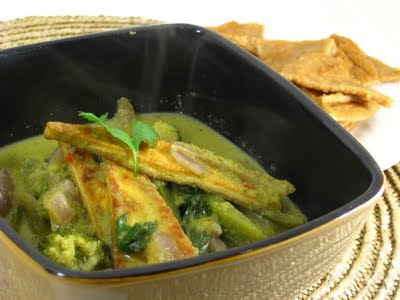 In the back, I made some whole wheat crepes for dipping. It usually comes with these savory Thai Pancakes, but I can't figure out where to get them or what they are exactly. They're so of like puff pastry, though.

Last week, I also consulted VwaV and make some falafel. It's not super traditional and it doesn't look green mostly because I didn't have any parsley. I use some dried cilantro instead. I wrapped it in a whole wheat pita with hummus, tomato, red onion, and spicy spinach. 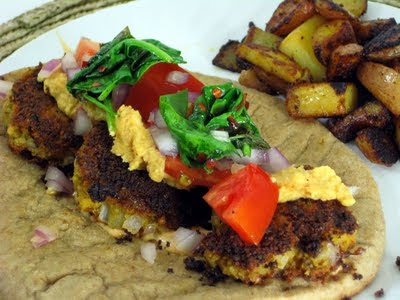 I'll have a more regular post tomorrow. I just thought I'd show you we're still sticking to the regiment as best we can. Keeping it whole wheat, and using lower fat options. Since we started this I've dropped one pant size and 24 lbs. Andrew's cut 4-6 inches [[it's hard to say, he never used to try on pants]] and around 30 lbs. We're feeling good and eating well.
Posted by Unknown at 11:53 AM

Email ThisBlogThis!Share to TwitterShare to FacebookShare to Pinterest
Labels: Recipe Review, the regiment

Hi Tracey!! Its your aunt Cathy, I just started reading your receipes. They look so good..yummy! I am all for trying new and tasty foods. Well I will continue looking at your web site.

Email your address to me and I will keep in touch from time to time.
cathy@twcny.rr.com