Pennsylvania is laden with tolls and shitty government-run bathroom/gas stops that I dubbed "Roy Rogers stops". Once we actually got into Philly, it was under construction. So, our last 10 minutes of driving took about an hour and a half. In the actual city, they have strangely narrow streets that are pretty uncomfortable to drive on. Not to mention the obstacle course we had to park in. People also park in the center divides of the street? What is that?!

It's a very cute city, though. Every other building had giant murals, and their capital building is a gorgeous piece of architecture. Their streets are a little strange and confusing, but it seemed the farther east we went, the more complicated everything was. I'd go back there.

We were only there a day and a half with the sole purpose of seeing UFC 101, so we hit a couple vegan spots to pass the time. UFC 101 was amazing by the way -- the Wachovia Center was awesome. Our far away cheap seats ended up being great seats and we sat next to two very large [[in size, not dedication]] BJ Penn fans waving a Hawaiian flag. Those guys could eat . . .

[[Govinda's-- Gourmet To Go]]
Govinda's is vegan and vegetarian. They also have vegan ice cream and cakes. During the day they have a to-go counter. At night, it's a fancier restaurant. 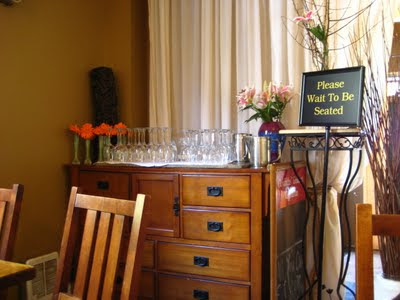 waiting around with our starbucks

The first restaurant we went to was a bit of a disappointment. Happy cow reviewers seemed to love the food and detest the service, while we didn't mind the service and sort of detested the food. Andrew got a seafood wrap with entirely too much vegenaise for one sitting. I got a very average philly cheese steak. We also got a side of fried chicken nuggets. I think I'm getting sick of gummy fake meat products. 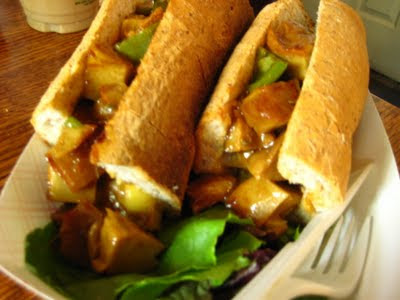 The cheese steak. Truth be told I was starving and this was really delicious at first. Got old fast though. 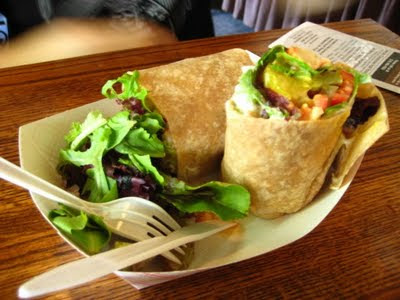 The seafood wrap. It tasted like seafood. A gallon of vegenaise. If Andrew was a stickler, we would have sent this back. 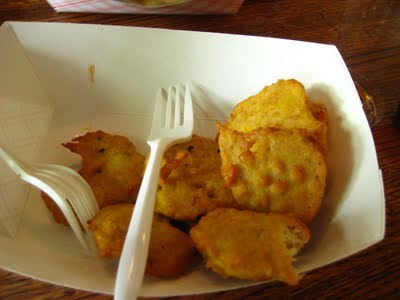 That's all I really have to say about this place. Cheap food, cheap quality. 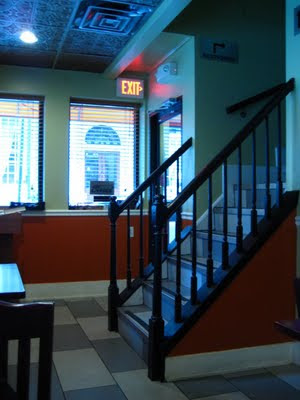 I can only say amazing things about Mi Lah's. Before we went to the UFC event, we popped into Mi Lah's for a quick dinner. After Govinda's, we weren't expecting much. This place was amazing, though. We liked it so much, we got brunch there the next day.

Andrew had one of his spicy throw downs. Any time we go to an Asian restaurant, he'll ask the waiter to make it spicy -- but not white people spicy, really spicy. And he'll actually say that. And the waiter will look at him like are you sure you can handle our shit? Then, Andrew will ask them to bring it. I'm sure I'm making this sound much cheesier than it actually is, but you catch my drift. He asked them to bring it... and they did.

As we walked out we saw the chef hanging out at the hostess stand. He's not much older than us and he was wearing a baseball cap with hipster, black glasses and a button up flannel [[I thought that was hilarious]]. Andrew shook his hand and told him it was the best Thai curry he ever had. I think that made his day, because when we came in for brunch the next day, he remembered us.

The regular menu was kind of pricey, about 17 dollars per plate. Our brunch was a flat 20 dollars per person. They gave you a muffin and fruit plate and some amazing house made juices to start. And then you can choose from several menu items. Andrew and I are seriously considering moving to Philly just to be near this restaurant. The service was fast and good, and the food was excellent. If you ever find yourself in Philly, go here! 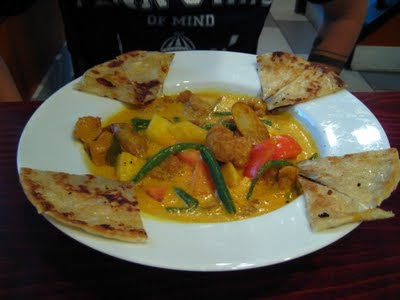 The amazing Thai yellow curry. Not too much heat either, even though Andrew threw down. 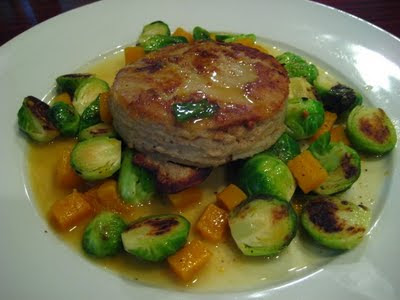 Potato Gratin with brussels sprouts and mangos and a cashew cheese. Really tasty! 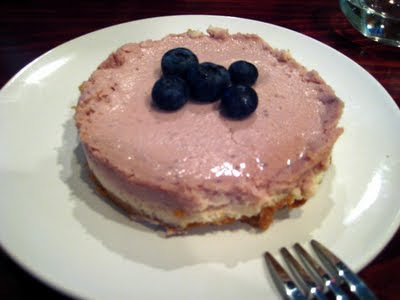 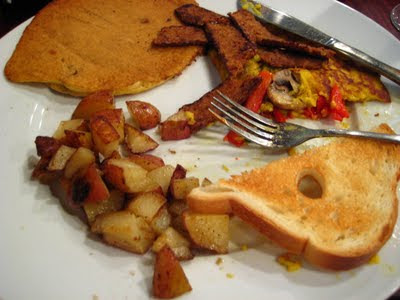 My brunch! An amazing vegan omelet. SO good.With a pancake, toast, home fries, and tempeh bacon. I started eating before I took the picture. Sorry! 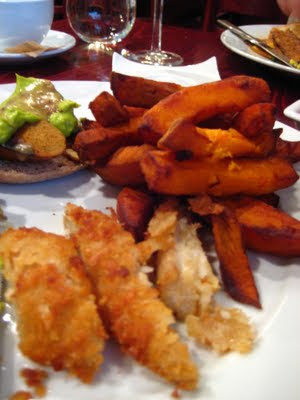 Sorry about that first restaurant - bummer!!

CAN'T WAIT FOR THE NYC RECAP!! My favorite city.

Hi, We visited Philly last Spring and we loved it!! We were on foot, as we took the train there and I think the came across a really nice Indian restaurant, and had a very good meal there, and also had a pretty good meal at a vegan chinese place.
Peace, Stephanie

Hi again, I meant to say..."we were on foot, as we took the train there, and I think the city was really great to see that way.We came across a really nice Indian place..."

We also walked around the jewelery district...and around the museums, especially the Rodin museum...

dang, i thought UFC 101 sucked! although, seeing it in person may make the experience more enjoyable. just thought there were a couple boring fights coupled with poor judging and bad referee stoppage. food looks good BTW

Veggiegirl -- Eh, you win some, you lose some. BTW, do you have any raw food advice. Andrew and I are trying to make the switch over for his stunt. We bought RAWvolution.

Stephanie -- Yeah, we liked Philly a lot. Glad you found some good spots to eat at!

Chris -- UFC 101 was boring (especially the undercard fights) with one TERRIBLE ref stoppage. I agree. But the Silva fight was classic. And it was pretty strange to watch two fighters (Forrest and Kenny Florian) run away crying. Where IS Forrest anyway??

Rodin museum is a very cool place i had been long time there!!!
___________________
Carol
Professional Monitering security systems for Homes, Offices & Appartments

Just went to Govinda's To Go last night. Didn't realize the Veggie Pepper Steak sandwich was veggie, not vegan. (Had it with the vegan cheese, though.) We also had the Mock Chicken Tortilla Soup. I liked the flavors of the food, but like you, I'm feeling very done with anything that's supposed to imitate meat. I guess I've been meatless for so long, that I've lost my taste for it completely. Next time I go to Govindas, I'll just order "real" vegan foods, like the Golden Tofu sandwich, or the desserts. However, I'm sure that anyone who's looking for an imitation cheesesteak may think this place is worth the try.