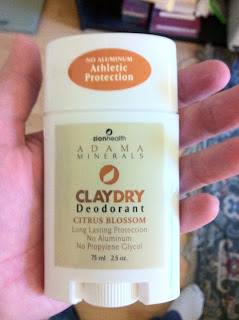 If you're a vegan and you're into naturalish products, you're constantly tempted to slip up and try something more, how shall we say it, mainstream?

It could be a soap, a shaving cream, a tampon with a plastic applicator instead of a paper one. There is a diffent temptation for each of us.

For me it's deodorant.

I've been searching a long time for a deodorant that A) works. And b) won't give me leukemia. With those two parameters, it's hard to find the perfect choice.

After almost giving up on the natural deodorant search and settling with some strongly scented commercial stuff like Axe, I sniffed around the co-op (literally) - pulling off cap after cap in hopes of finding something non-feminine and effective.

And then I did.

My new particular flavor showcases what a sucker I am for citrus - orange blossom. It is an all gender acceptable, light orange aroma grounded in the earthy smells of clay. A touch of hippy, a touch of high class. Just like I it.

Stop by the Clintonville Community Market and try some out. Well, not right in the store. But buy some and try it out.

I guess andrew, my bad :) still funny as hell

Awesome ^^ I use Tom's unscented because I also don't like the idea of leukemia & the like. It works well about 90% of the time. I may have to check this stuff out.