More From The Conscious Cook 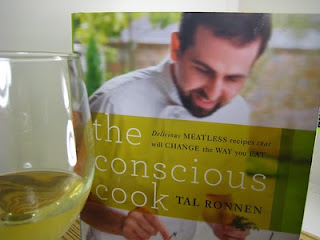 I'm posting again about The Conscious Cook, mostly because I seriously love it. Not to knock on my old faithfuls, but this book is completely different than all the other cookbooks I have. This is what I wanted Great Chefs Cook Vegan to be like, but it wasn't [[If you haven't seen that book, it's just a lot of overly complex recipes with machinery and foods I don't have access to and don't want to buy for one recipe]]. But this cookbook is just challenging enough for it to be fun and not daunting. And Ronnen does add some strange ingredients, like the lobster mushroom. I hunted for some, but an employee from whole foods assured me she's only seen them there once in the two years she's worked there-- so I'm thinking it's a pretty obscure item. From what I read, there's a fungus that grows on mushrooms, turns them red, and gives them a spicy/seafood flavor-- and that's a lobster mushroom. But even though you can't find some items, I've subbed a lot of stuff and it's always turned out spectacular. Here are some more things I've tried from The Conscious Cook...

Holy Mother of Pearl, this was delicious! This is the Paella: Nori dusted oyster mushrooms, artichoke hearts cooked in white wine and lemon, blackened Italian Field Roast Sausages with a delicious tangy rice. It's very remniscent of seafood, while being completely vegan. I loved it! I coundn't find a medium grain rice, as requested, so I just used some long grain brown rice. It took a lot longer to cook. Like an extra 30 minutes plus some extra no-chicken broth. But it was worth it.

I think this is probably the perfect dish. Pine nut and basil crusted gardein with purple kale [[or just regular kale, it's mostly for looks. I found the purple kale at Kroger]], roasted fingerling potatoes, and an [oyster mushroom] beurre blac sauce. It's supposed to have lobster mushrooms, but again, I could not find them. This dish did not lack without them, though! The sauce is rich [[with about 8 tbs earth balance!]] and creamy with a very sophisticated lemon buttery flavor. The base is supposed to be a cashew cream recipe Ronnen has in his cookbook, however, I didn't really plan ahead of time. Instead, I just made a roux with some flour and earth balance, then added about 1 cup soy creamer. Worked perfectly!

Anyway, I'm just really freaking obsessed with these recipes. I hope you all at least check it out. If you're in a cooking rut [[which I clearly am, by my lack of posting]], this book will rip you out of it. Maybe.

Dont' forget the amazing Cajun Portobello Sandwiches either!
Posted by Unknown at 5:04 PM