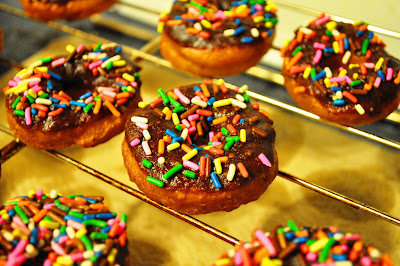 I'm really not much of a baker. At all. I know some basic rules, and I can follow a recipe like a champ, but I'm not confident enough to "invent" recipes. Sometimes I'll try to veganize a recipe. Like maybe once. But for the most part I leave it to the experts. I've tried two vegan donut (or doughnut... I don't know which one I like better yet) recipes, and they've both been phenomenal.

The first recipe I tried was Vegan Yum Yum's. It's more of donut-shaped cupcake thing than a donut, but they are really amazing. They're also baked, which makes me feel less guilty about the whole thing. Everyone always loves them, and they have been requested on occasion. That was about two years ago, and it's been my go-to donut recipe ever since.

Recently, I got adventurous and attempted to make Vegan Dad's deep fried donuts. It's not something I'll do all the time, but if you're really in the mood for an actual donut, this will more than curb your desires. It takes a couple hours with yeast/rising times, plus you have to deep fry them and watch them and not burn them. And I have been known to burn things. But like I said, they are really worth it. You don't even need a donut-shaped pan for these! Or a deep fryer technically. I just bought some cheap canola oil, filled up a pot, and heated it with my milk frother thermometer. It only goes up to 180F, but I just assumed a double rotation was double the max temperature. It's a little ghetto, but it works!

Anyway, if you're in the mood for donuts, give one of these a try.

Stay tuned, I haven't quit. More to come!
Posted by Unknown at 3:32 PM