My exploration of cheesecakes continually expands. Recently, I wanted to experiment with layering, and I wanted to create a peanut butter cheesecake-- so I just combined the two! I just took my standard cheesecake recipe, divided it in half, added one cup of melted vegan chocolate chips to one and one cup of organic smooth peanut butter to the other. Then I poured one layer in and the the chocolate one top. The cheesecake batter is so thick, there really isn't an issue of it blending or anything. The layers will stay pretty uniform. This was also my first stab and making a crust that goes all along the outside of the cheesecake, so it looks pretty funky. But it tasted great! Then I made a homemade fudge sauce, spread it on top, and crushed some extra Oreo crumbs to sprinkle over that. The results were quite tasty! 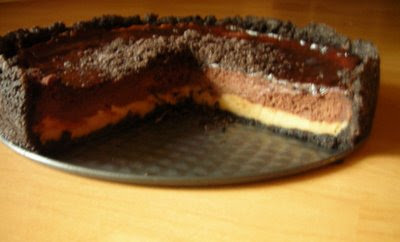 Sorry the image stinks. Andy wasn't around to take a better one. The crust was just 1 1/2 cups of Oreos crushed with a 1/2 cup of melted earth balance butter. [[Oreos are vegan, but I also use Newman's Own and that turns out good too.]]