Andy and I tried out this recipe a few nights ago, and it was a great success. It was my first time working with seitan, which is incredibly hard to find as it turns out. Whole Foods stopped carrying it for a while, so the second they got it back, we stocked up and started hunting recipes. PPK advises you to make your own because of how expensive it is-- but a 12 oz package was only 3.95 at Whole Foods. 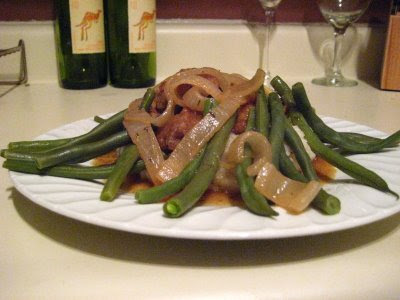 This recipe from the Veganomicon sounded the most approachable-- it's really just lightly floured and pan friend seitan over garlic mashed potatoes with steamed green beans, all covered with a white wine reduction sauce (not as complicated and fancy as you think). Like I've mentioned before, Andy and I really detest olives and capers-- so we just took that out all together. We couldn't find shallots, so we just used a regular white onion. It turned out just as tasty. I probably doubled the amount of wine, too, just because I really like the flavor. We used a dry wine-- because that's best, according to the wine guy at Whole Foods. It was an organic sauvignon blanc-- under 15 dollars, too. You don't need to go all out when you're cooking. Ignore the saying, Don't cook with a wine you wouldn't drink. [[Although we have nothing against drinking a cheap wine]]

The best advice I can give you-- don't be afraid to put your own spin on recipes. It's better to change a recipe, then totally write it off because it has olives.

Thanks for visiting my blog :) Yes, Seitan Picatta is great..even without wine :)