I had these puff pastry sheets in my freezer and a container of cream cheese, so I made little tarlets! I guess they're more like a danish, but their shape reminds me of mini-pies and tarlets. They're really adorable. 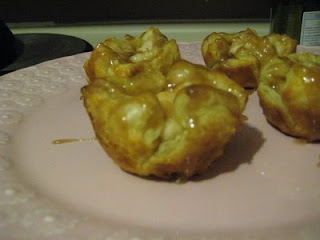 * 1 sheet of puff pastry - I had some dough left over, I didn't use the whole thing
* 4 ounces cream cheese - roughly half a container of Better Than Cream Cheese, tofutti brand
* 1/4 cup confectioners sugar
* 1/2 teaspoon vanilla

-- You will need to defrost your puff pastry, so take it out an hour in advanced.
-- Once defrosted, preheat your oven per package instructions, 400 degrees [[F]] I believe. To prepare the filling, combine cream cheese, confectioners sugar, and vanilla and blend with a hand blender until well combined. Add more sugar if you want it sweeter.
-- To assemble, unroll puff pastry with a little flour, it generally comes in a trifold. Roll out a bit and cut into 4'' squares. Lightly push puff pastry squares into a cupcake pan, with the four corners drapped over the sides. Place a tablespoon [[it looks like a little, but the cream cheeses puffs up i the oven]] of cream cheese in the center and then fold the four corners into the center. It doesn't have to look pretty-- whatever shape you make will just puff up and look different.
-- Place in oven and cook for about 15 to 20 minutes, until golden brown. Remove and cool.

-- Heat butter in a small sauce pan over medium heat. Add sugar and cinnamon and whisk together. Whisk in flour until fully dissolved. Remove from heat and drizzle over cooled tarlets with a spoon.

-- Refrigerate to store, heat 30 seconds to eat again. Or you can eat them cold. But they're infinitely better warmed up. Enjoy!
Posted by Unknown at 10:49 AM

Those look lovely, and I bet they tasted even better :)