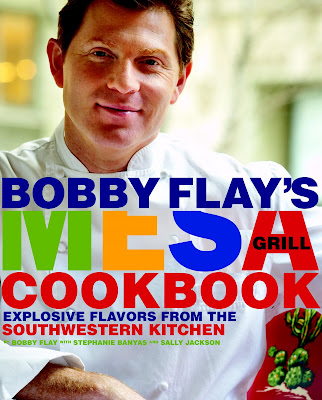 I picked up a Bobby Flay cookbook from the library and decided to attempt to veganize as many recipes in there as I can. I already tried a couple sauces, which turned out WONDERFULLY [[I will post more later once I upload pictures]] and tonight I will attempt a few more. The great part is that a lot of them are really simple but powerfully flavored. They can be impressive without too much work. Not that I'm lazy-- but I am. And that's why I love Bobby Flay.

Aside from that, I'm feeling a little run down by the vegan agenda. I feel like just eating my food and not trying to defend it anymore. Andrew's brother got in a little debate with Andrew last night about how vegan cooks have to cover up flavors and season a lot, while a plain piece of chicken is delicious on it's own. I don't know about you, but in my meat eating days, I did not like plain chicken. It's bland and boring and tastes like balls. I'd much rather have it seasons, fried, covered in sauce-- whatever. I'd do the same shit to tofu as I would to chicken. And since when is seasoning covering something up? Cooks season shit. That whole conversation just got me annoyed with people. So I think I'm over trying to convince people that vegan food is just as good, if not better. I'm just going to make vegan food, post about it, and hopefully impart some awesome flavor into your life-- sans the vegan agenda. Maybe if I come across someone who makes good points, I'll talk about it. But for now, I'm irritated.

Now, onto my Bobby Flay veganization series...
Posted by Unknown at 5:42 PM

Email ThisBlogThis!Share to TwitterShare to FacebookShare to Pinterest
Labels: ramblings

I hear you, sister. Trying to defend my choices, which are *clearly* healthier, kinder and better for the planet to stupid omnivores who think that they are carnivores is annoying and basically a waste of time.

My favorite? When they start comparing teeth. "See! mine's is pointy-ded, jes like a LIONS!!!"

Totally agree with you on the seasoning point. I had a think about what meats I used to like a bit ago. They were: sausages, bacon, chicken, mince (ground beef) (in lasagne etc). Sausages are heavily herbed and spiced. Bacon tastes of salt and smoke. I only liked chicken with gravy (i.e. salt). Ground beef doesn't taste of a huge amount in a lasagne and mainly imparts texture.

OK, some people like meat on its own (steak; game) but I reckon the most popular ways of eating meat don't really taste of meat.

On the "argument" front: I think quietly getting on with it is a better way to inspire people anyway. And it's less stress for you!