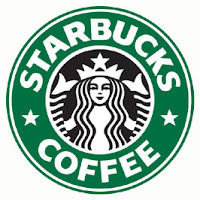 Apparently vegans have some vendetta against Starbucks I never heard about. Personally, I have a Stabucks problem. I go there every day. Maybe twice. Currently, I'm obsessed with the black tea lemonade, three pumps of classic syrup and the soy mocha. They're pretty amazing. Andrew has a loyalty to the green tea soy latte with sugar-free vanilla instead of the classic syrup. Personally, I don't see an issue with this delectable indulgence-- I guess not being vegan enough makes them bad? One of those examiner articles came up in my google newsfeed and just irritated me. [[here it is]]

Beyond the fact that she's pretty misinformed about Starbucks, it sounded like she just wanted to bitch for the sake of bitching. A lot of vegans will go to taco bell or something and pick around a sparsely vegan menu-- why attack Starbucks when they seem to be more vegan friendly than most? PLUS, I heard from a starbucks employee that they're greatly expanding their fair trade, organic line of coffee-- and that's something to celebrate.

I guess I just wanted to say: Starbucks, you rule. If not for being the only coffee place that offers a green tea latte, then because you all are super nice. Almost robotically nice. And when I roll up, and you see my car, you have drinks started. That saves me like... 30 seconds of ordering? And another 30 seconds for you to write down all that short hand on the cup. Don't let the haters bring you down. I still love you.
Posted by Unknown at 11:37 AM

Email ThisBlogThis!Share to TwitterShare to FacebookShare to Pinterest
Labels: ramblings

What's wrong with shopping at Wal-Mart?

Wal-Mart is a low-end, all-purpose retailer that is the only viable option for many struggling Americans.

Starbucks is a high-end luxury good provider who give exceptional benefits to their employees (similar to Wal-Mart?)... while being the largest buyer of "Fair Trade" coffee in the world.

What's the similarity? They are both successful and fulfill their customers' needs and desires?

Go tell the lower-income Americans buying Ramen noodles at Wal-Mart that they are the same as me drinking a 2 Soy, Green Tea Lattes a day that we are the same. It would be funny.

I understand that people see Walmart as a store which perpetuates poverty, a contributor to suburban sprawl, and a killer of businesses -- but starbucks is quite the opposite.


Starbucks does not provide the same product at a cheaper cost-- it provides a BETTER product and at a slightly higher cost.

I don't promote poverty and I support a great business. I don't see the similarities at all.