Right now Andrew and I are with his parents in Florida. The weather is nice, not too hot, and the beach isn't too populated, which I like. We're sort of taking a break from working out- a forced one. We briefly considered running on the sand, but I think we decided that'd be rougher on our legs than concrete.

We're sort of surviving on packaged vegan food. We found this natural food store and deli called Ada's on happy cow. When we got there though, it was closed even though it was supposed to be open. The deli was enticing, maybe we'll make it over there later this week. Instead we went to Mother Earth- a slightly barren natural food store slightly reminiscent of our co-op. We found a few Amy's meals -- they only had the tamales, though. We also discovered some vegan "chicken" wings made by Health is Wealth. Those are amazing, and battered with whole wheat flour, making them completely regiment approved. We also found some whole wheat wrapped vegan "beef" and veggie burritos made by Helen's Kitchen which taste like barf to me. Peas and carrots just don't work in a Mexican food situation. Andrew seems to like them alright, though. I miss our Amy's burritos.

Mother Earth also had some Ezekiel products and vegenaise. All great news. Limited produce, but enough to make some killer guacamole later. I have some avocados in a bag now, hoping they get soft enough.

And since I have no food pictures for you today, here's some from our parasailing adventure today: 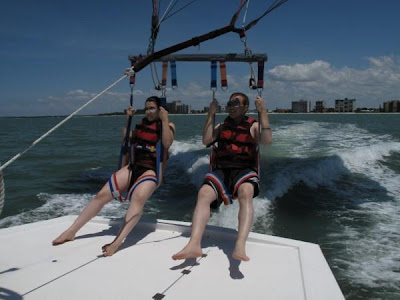 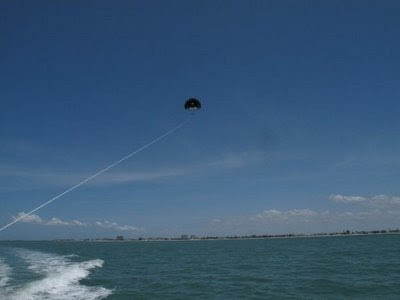