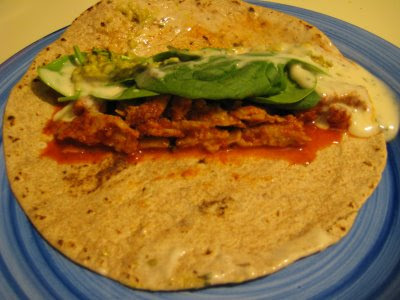 Andrew would always talk about these amazing wraps he used to make. So I tried to recreate them. A little hot wing sauce, a little seitan, some spinach,vegan ranch and my addition -- guacamole [[don't worry, it worked]].

We used Karen's Hot Wing Sauce. I can't find a link to it online, otherwise I'd show you. It's pretty freaking hot though. If you're not a big spicy eater, I'd recommend using one you're more familiar with or checking out some milder hot wing sauces. Or even just doing a barbecue seitan wrap.

We also used Organicville Non-dairy ranch for the first time, and it worked very well. The next day we used left over seitan to make a buffalo spinach salad and topped it with this ranch. It's a little runnier than your standard ranch, but it tasted great and is extremely healthy [[surprisingly]]. It's mostly tofu and soy milk and a measely 90 calories a serving. 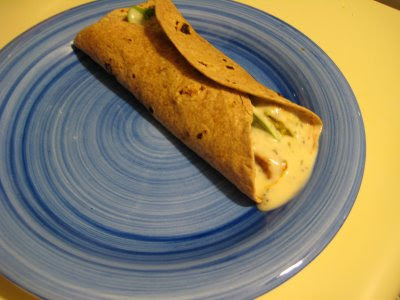 [[Californian Buffalo Chicken-Style Seitan Wraps]]
I added the 'Californian' because well... what makes something Californian? Avocado.

Stove Top Version:
--Heat olive oil on low to medium heat. Once hot, add the slightly chopped chicken-style seitan [[you want bite size pieces, some are really big]]. Cool it until it's browned and cripsy, about 10 minutes.
-- Add the hot wing sauce. Just add it until it's completely coated the seitan. Cook about 5 minutes, remove from heat.
-- Pile it all in a warmed tortilla.

Microwave version:
-- Microwave seitan in a microwave-safe bowl for about 2-3 minutes until completely warmed.
-- Remove from microwave and toss with hot wing sauce.
-- Assemble in a microwaved tortilla with all the fixings.
Posted by Unknown at 8:59 AM

Have you ever tried making your own seitan? Over time, it's cheaper than buying the pre-made stuff and it's ind of fun because by changing the simmering liquid you can change the flavor.