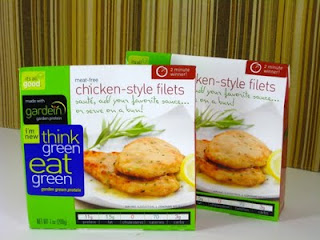 I had gardein for the first time while eating a faux chicken salad sandwich from the Clintonville Community Market made by Del's Wellness Forum Foods. The "chicken" was suspiciously chicken-like, and ever since I discovered it was gardein, I've been trying to figure out what the hell gardein is. While I'm still not entirely sure what it is or how it's made, I did recently find it at Kroger. They had a bunch of other varieties, but I grabbed the gardein chicken filets. They're flavor neutral, so you can make them with whatever sauce you want. Each fillet is only 70 calories and under 2 grams of fat. The ingredients aren't too crazy looking either - it's a combinations of soy, vital wheal gluten, various vegetables, and "ancient grains" including quinoa.

I've never had Marsala wine before, and honestly I don't know very much about wines. It turns out this 18% alcohol wine is too high to be carried at Kroger. Or any other grocery store for that matter. I forgot about these alcohol laws here that don't exist in California. We could have gone to Huffman's in Arlington, but they close early.

Anyway, his parents came to the rescue at 9:30 last night and had half of a bottle sitting in their fridge. I almost got frustrated at Kroger and just bought a regular, generic white wine. But I am so glad I didn't. Marsala wine has a really distinct flavor that makes chicken - or gardein - marsala really tasty. I should also mention that this dish traditionally is served with mushrooms, but since I didn't have any, I made it with thinly sliced red onions.

2 servings of whole wheat spaghetti, cooked and tossed with a little garlic and earth balance

-- Pre-heat oven to 250 F and start the pasta.
-- Mix flour and first set of seasoning.
-- Heat butter and oil in a skillet on medium high heat.
-- Dredge the fillets in the flour mixture and cook in the butter/oil for 2-3 minutes per side until golden and crispy.
-- Place in a baking dish and put in the oven to keep warm.

-- Keep the oil and butter in the pan. Some of the flour should have come off of the fillets and make a sludge in the pan.
-- Keeping the heat on medium, add the Marsala wine while scraping excess bits from the bottom of the pan.
-- Add the seasoning and let the wine simmer and reduce about 5 minutes.
-- Add 1 cup broth and bring back to a simmer. Let that thicken slightly and reduce a bit.
-- Add the onions. Let simmer on low to medium heat until onions are limp.
-- Toss the pasta with a little earth balance and garlic, top with fillets from the oven, and add the sauce.
Posted by Unknown at 10:11 AM