The hub master fresh and I went out Friday to Hal & Al's for Rad Dog's opening. The bar is way the hell in BFE, at least for us, but it was worth the trip. They had their usual menu plus macaroni, fried vegetables, and some others. Andrew got the Bi Bin Bop, which is a tempura fried dog with kimchee and Korean red pepper sauce. He also got the mac n cheeze. I got the less adventurous but still delicious, Rad Dog -- beer brat, spicy mustard, sauerkraut, and grilled onions and peppers.

It was really packed when we first got there, so we were sort of awkwardly standing at the bar until some seats opened up. When we finally did get some seats, I noticed a couple of old men eating the mac n cheeze and asked if it was good. I guess they were really drunk, because one of the guys kept going on and on about how awesome the food was as he shoved a fork full in my face. I tried to decline as politely as possible making some comment about swine flu. Then the other guy offered me some of the "regular" bar food and I said I couldn't eat it. And he said What? Well Why the hell not? So I tried to explain I'm vegan, there's probably egg in that pretzel. And he shouts in a loud, old man bar voice You're a WHAT? A pagan? I tried to tell him louder VEGAN. And then Andew pipes in That mac n cheeze your eating has no cheese in it. And the one eating it said Well I don't care, it's good. That's when we realized that a silly amount of people didn't even realize that they were getting vegan food. A little later a couple came in, and Andrew asked if they were vegan. They weren't. I think it actually pissed them off that the menu was vegan, because they really wanted some hot dogs. I didn't see them get food. 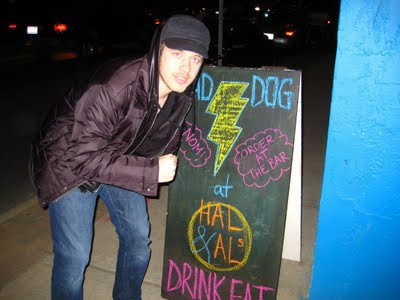 Our orders took a long time to get out. I think that's just a product of street vendor gone kitchen runner. It was hard to see the little numbers people were given after they ordered. We saw Todd running around frantically trying to find whatever number order he had at the time. I imagine things like this will improve, though.

The food was awesome. They had an old school Nintendo you could play and a REALLY terrible DJ. I hate to pass judgment on peoples' musical choices, because I think that's snobby and arrogant, so I won't. He was bad because he basically sat there and let his iTunes go on autopilot while he text messaged people. 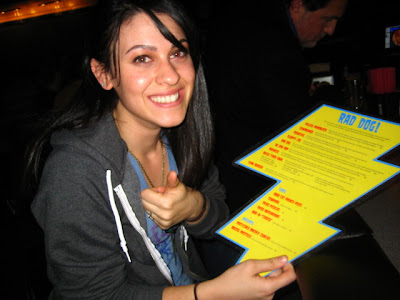 By about midnight, the bar was emptying out, and Andrew and I had had our fill. So we left. It was a cool little place. Some strange people, but really good food. Check it out!!
Posted by Unknown at 8:50 AM

Columbus vegans sure know how to party.