Thanksgiving and an Ode to Pesto

Thanksgiving was good. I got to get in Mimi's way while I tried to cook a whole other thrown-together Thanksgiving meal. It turned out well all things considered. I made a green bean casserole the night before, baked it without the onions, and carried it in a cooler as we drove to KY. I baked it there with some fancy fried onions I found at whole foods [[vegan!]]-- that way the onions didn't get soggy sitting in the cooler. Other than that, Mimi set aside some potatoes to make vegan mashed potatoes, and there were some sides of vegetables free of butter. Notably, this bean/corn stew type thing that Dave made the night before. And then the Tofurky with stuffing and gravy. 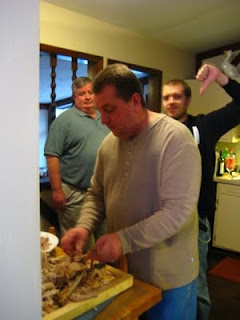 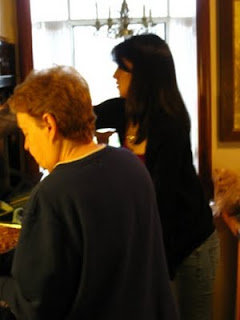 I don't have any new recipes for you, as this weekend we only had about 60 dollars until payday which means no grocery shopping, which means easy, thrown together food. I do however love pesto, and made some before we left to KY for Thanksgiving. So, I got to make some stuff with that. This isn't the healthiest post ever, mind you. It is the holidays, though, so it's to be expected. Don't worry, you'll probably join a gym for your new year's resolution.

Pesto sandwich: Fried tofu marinated in pesto, pesto spread, vegenaise, and fried onions on ezekiel toast. It's a low fat dish. :)
Posted by Unknown at 11:05 AM

Glad you had a good Thanksgiving!