I've disappeared a little bit. And when I do reappear, it's usually to talk about The Conscious Cook, I know. I've been kind of on a recipe making/cooking hiatus for a couple reasons: 1) Andrew is competing in the Arnold Classic, or the Arnold Sports Festival, on Saturday, thus he is cutting weight. Which means he's not eating. Which means I'm out a job. And 2) I've embarked on yet another hobby, pottery. Which takes away a few of my nights each week, and has really helped business at Tip Top [[not that they need it, but it's near the studio- kinda - and take out is easier than cooking at 9 at night]]. So for that, I apologize.

Last Friday my pottery studio, Clayspace, had a gallery showing for all the classes [[including little ole beginners potter's wheel - my class]]. It was fun. A lot of people came out, and I brought a vegan cheesecake to share [[since it was a pot luck, too]]. I don't really have any pictures of the night. I brought my camera and everything, but so many people wound up coming and sometimes you're just having too much fun to take pictures. Here are some pictures of my pottery that I took: 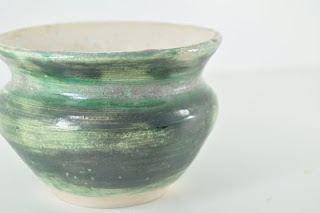 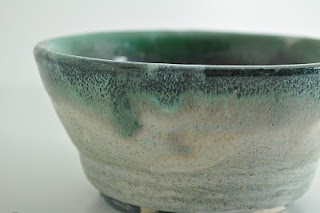 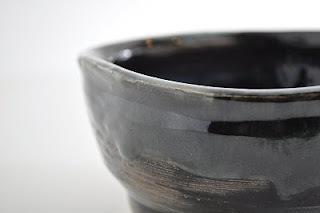 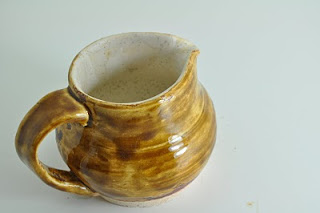 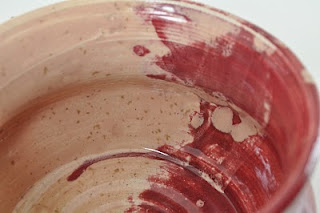 Like I said, it was beginners potter's wheel, so a lot of this stuff is pretty conventional. I experimented with the colors a little bit, so that's why some of them are the color of poop. This time around I'm taking a slab class. Ideally I'll be making more interesting pieces. We'll see!

Anyway, the classes are super fun, and the instructors are really helpful. If anyone is interested in taking one, go look at their website and contact Tami Knight. [[PS she's vegetarian!]]

As far as The Arnold Sports Festival goes, Andrew in competing in Sanshou on Saturday. No head contact, but kicking, punching below the neck, and some throws are involved. I'm pretty excited for him. Since he's been cutting weight his food has consisted of Amy's lunches [[which are conveniently under 300 calories]] and clif bar dinners. He's pretty manorexic lately [[read: man anorexic]]. I'm trying not to gorge myself too much in front of him. Although I did make some awesome "Oysters Rockafeller" from [[duh]] The Conscious Cook last night. I forced him to try one. I ate the rest pretty much. I'll post about those later. The night before that I had a big ass bowl of brussels sprouts covered in earth balance and cayenne pepper. Which should explain to you my lack of posting. Generally lack luster dinners or things from a cookbook.

An adorable little Amy's pizza! Cheeseless and so freaking tasty.

Something I do want to share, however, is this hilarious entry into Cupcake Wars. Columbus' very own Pattycake Bakery was asked to submit a video to be a part of Cupcake Wars on food network. What I discovered from watching their video is that they have an evil twin next door. Check it out:

Hi Tracy, and thanks for the link!

Let me say that we fully acknowledge our silly business in this thrown-together vid. We did it in less than a day in the name of (cupcake) war, where trash talking and self-inflation is a plus (we figured). For more details, please check out our blog!

Is that the ROASTED VEGETABLE Amy's pizza?!? I'm crazed for that thing.

I spread the love to my roommate and we drool at frozen boxes through Kroger's glass freezer doors. When not on sale the dough rounds are merely art forms.

Love Pattycake! Very cute video that I doubt Food Network will be able to ignore! Can't wait for the episode...