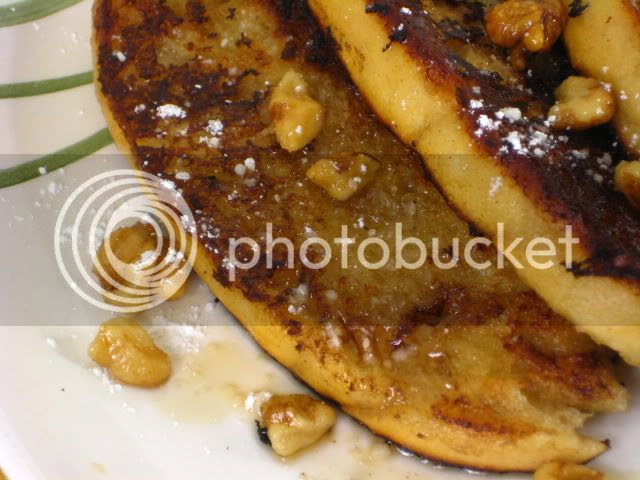 Breakfast undoubtedly goes on my list of favorite foods. At my mom's house, everyone eats omelets-- daily. And before I was vegan, I was on the omelet train, too. I'd make one for lunch and probably eat another one for dinner during the summer. When I went to college, we'd drive to the nearest city to go to Denny's, just to get a midnight omelet with a side of everything [[because everything seems to come with everything, doesn't it?]]. My little sister hates eggs, though, so she was sort of the odd one out. She always wanted pancakes. And not to knock on my mom or the fine people at Bisquick, but I hated my mom's pancakes. I hate sogginess and the general texture of a non-fluffy pancake. But I can't blame her. Such a pancake takes infinite finesse and more time than she was willing to put into it. If you have Vegan with a Vengeance, Isa's adds lots of tips for perfect pancakes. One being: refrigerate your batter the night before. I swear by that.

But this post isn't about omelets or pancakes; it's about french toast. Whenever I want to do something nice, I'll wake up on the weekends and make french toast for me and Andrew. We usually just snack a granola bar or eat some cereal for breakfast, so it's always awesome when I have time to make french toast. These are sweet with just a hint of banana that doesn't overwhelm the undertones of vanilla and cinnamon. The candied walnuts aren't too sweet and add a nice texture contrast to the fluffy, crispy french toast. I love these! 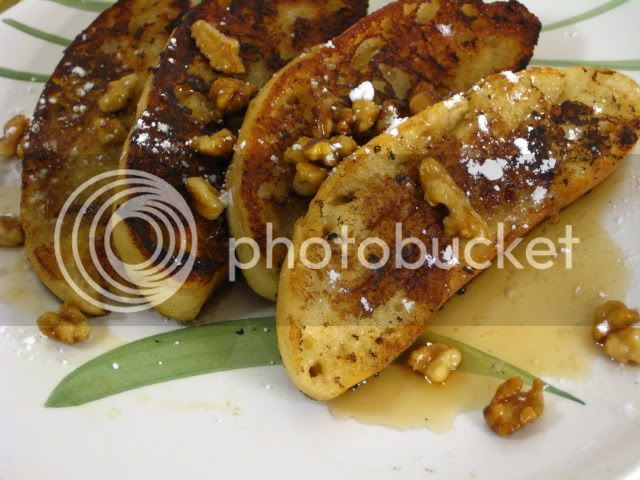 Instructions for Candied Walnuts:
- Blanch walnuts by boiling them in salted water for about 3-5 minutes. Strain and set aside in a medium sized baking dish.
- Melt butter on stove top.
- When melted, add the sugar and stir until dissolved. Remove from heat.
- Pour over nuts in the baking dish and stir until they are all fully coated. Sprinkle with salt and cinnamon and bake for about 10-15 minutes.

Instructions for French Toast:
- Place all ingredients, except the bread, in a blender and mix until smooth and creamy. You can also whip it with a hand blender, but that gets messy.
- Slice day old bread about 1/2 inch thick.
- Heat a large skillet with one tbs canola oil. After dredging both sides of the bread and allowing excess to drip off, place on heated skillet. You can use the extra tbs of canola oil if it gets too dry.
- Cook each side about five minutes, or until crispy. Keep warm in 200 degree F oven until ready to serve. 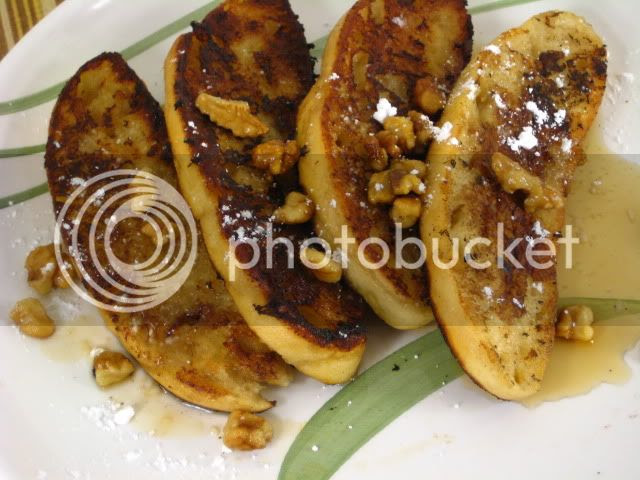 I tried this and it was really excellent. Thank you for the recipe - it is a real find, and quite easy to make.

I made these this past Saturday for brunch with some veggie sausage. Absolutely delicious! A new favorite for us.

I made this today with rice milk and sourdough and it still turned out amazing! The banana/blender trick is crucial. Thanks, Tracy!

Oh I love this recipe! We tried it last weekend when all my family was in town for a big football game, and it turned out fantastic. The best part is that no one even knew it was all vegan-- my family gives me all kinds of crap for that!