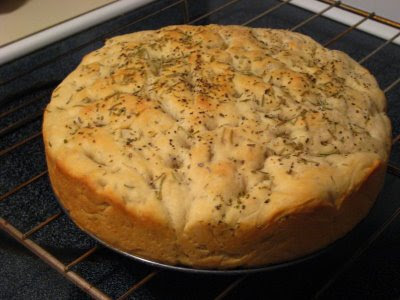 Back in Berkeley, CA Andy and I frequented Herbivore on Shattuck. They had this great sandwich-- garlic aioli, lightly grilled "chicken" [it didn't say but I think it was seitan], tomatoes, red onions, all on fluffy, delicious focaccia bread. It had a side of this bomber macaroni salad, and this green salad lightly dressed with some sort of vinaigrette I believe. Then, some days we'd get this amazing double layered carrot cake with a really sweet frosting. Anyways, I'm digressing from the point. We attempted to recreate this beautiful sandwich, only it seems nowhere in the world sells focaccia outside of restaurant land. I had been postponing making bread for all the catastrophes I believed would ensue, but as most things are in life-- it was much easier than it seemed.

I also took Latin for a minute and find this kind of stuff interesting:

In ancient Rome, panis focacius was a flat bread baked in the ashes of the fireplace, (focus in Latin). The word is derived from the Latin focus meaning “centre” and also “fireplace” -- the fireplace being in the centre of the house. In English, it is sometimes redundantly referred to as focaccia bread. As the tradition spread, the different dialects and diverse local ingredients resulted in a large variety of bread (some even may be considered cake).


Focaccia is a lot like pizza dough. It has a little olive oil and some herbs of your choosing-- and sometimes they like to use dotting (creating wells in the bread by poking it with your finger over and over). We like flavors-- so I went ahead and used several herbs. You can also add olives-- we hate them though, so we left them out. It's traditionally supposed to be more of a flat bread too, but since our purposes were for sandwiches, I went ahead and used a smaller pan and made it thicker. This isn't the exact recipe I used, but it's close.

Combine rosemary and water in bowl, then let cool to 110 degrees. Add yeast and sugar and let sit for 5 minutes. When yeast is nice and bubbly, add salt and 1 T oil, then stir in wheat flour. Begin adding white flour, stirring constantly, only until the dough begins to pull away from the side of the bowl.

Turn dough out onto floured counter and knead for 5-10 minutes, until smooth and elastic. If the dough seems sticky you can add a bit more flour.

Oil the other bowl and place the dough in it. Turn the dough so that the entire surface is lightly oiled. Cover with damp cloth, set in warm spot, and let rise about 1½ hours, until doubled.

Punch down dough and knead for 2 minutes. Oil baking sheet, place dough on top, and stretch to form a 12 by 12 inch square. Cover with towel and let rise for 45 minutes.


Preheat over to 375. Press down slightly on the dough every two inches or so, so that the top is dimpled. Sprinkle with salt and additional rosemary, if available. Drizzle with 2 T oil and bake until golden brown, about 25 minutes. Serve immediately, with a dish of your best olive oil and maybe some balsamic vinegar drizzled in it.

I've been trying to remember the name of the place that that delicious sandwich originated. It's flooding back to me now in all of it's wonderful meatless goodness. I saw focaccia at Panera the other day but I'm sure your homemade stuff was much better. Jealousy is what I feel right now. =)