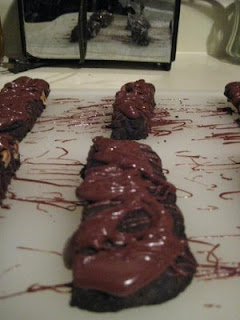 I love biscotti, and this biscotti recipe is to die for. I got this recipe from The Joy of Vegan Baking. Probably my favorite baking book ever- and where my favorite chocolate chip cookie recipe comes from, too!

Most of you probably know, but biscotti is Italian for biscuit. A little more from Wikipedia:

The word "biscotti" (pronounced "bis•CO*tea") in Italian is the plural form of biscotto, which applies to any type of biscuit, and originates from the medieval Latin word biscoctus, meaning "twice-baked": it defined biscuits baked twice in the oven, so they could be stored for long periods of time, which was particularly useful during journeys and wars. Through Middle French, the word was imported into the English language as "biscuit".

I'm really interested in the origins of things. I watched this whole special on the food network about the origins of ginger bread cookies. But I won't bore you with that. Check out that cook book though if you haven't. I added whole hazelnuts and chocolate ganache on top. 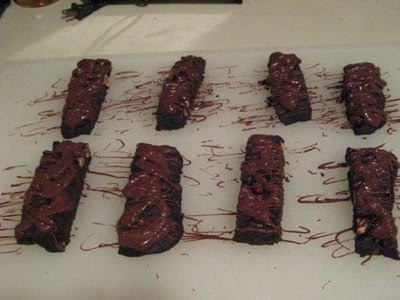