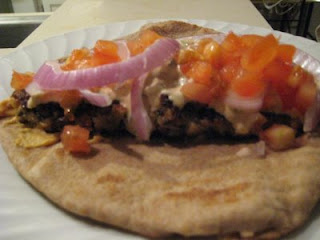 Last night, I wanted to try something different, so I looked up a vegan gyro recipe. Vegan Dad's recipe showed up, so I thought I'd give it a look and try it out. When it comes to this stuff, though, you have to be realistic with yourself. You're not going to get the same flavors as lamb. You just won't. This tastes, really, nothing like a gyro [[and Vegan Dad admits he's never had a lamb gyro before]], but it definitely references the flavors and is DAMN good-- I can assure you of that much. 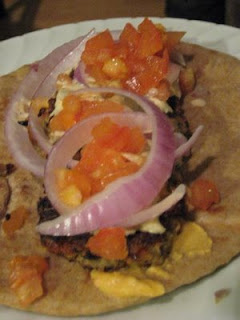 I made quite a few variations to his recipe. We went for a whole wheat pita-- tastes just as good, but it's way better for you [[and when you're frying little gyro patties in oil-- why add empty calories?]]. And don't use a pocket pita. It's just stupid.

We also used Bragg's Liquid Aminos instead of that mushroom soy sauce for two reasons: we couldn't find that mushroom soy sauce anywhere, and the Liquid Aminos give you those essential and non-essential amino acids you miss as a vegan [[more on it here]]. We left out the sage and used a tad bit more of all the spices. Instead of plain tempeh, we used flax tempeh-- it's no different and tasted great still. I also had to use a big more Vital Wheat Gluten, because it wasn't sticking. Eventually it became elastic, and I could patty and fry it. You really need to knead it, though. Next time I'll chop my onions really fine and use maybe half an onion-- the onions all sorta fell out. For the tatziki, I used 3/4 of a container of Tofutti sour cream instead of tofu-- which tasted great. As a final touch, we spread some red pepper hummus on it, with half-moon cut red onions and tomatoes. It was pretty delicious. Go check Vegan Dad.
Posted by Unknown at 6:02 PM

If you're ever in NYC, try Curly's Blue Plate special sandwich. It's a vegan seitan gyro and it tastes almost like the real thing. Gyro's were one of my favorite sandwiches when i was a meat eater. Thanks for the recipe!