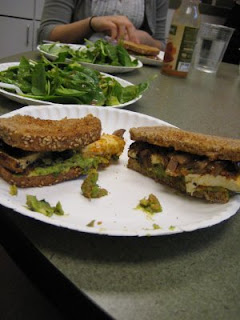 [[Chickpea Tofu Sandwich]]
Makes two hardy, delicious sandwiches. And if you can't take gluten, apparently chickpea flour is a great gluten-free way to fry up some tofu without having to batter it in white flour.

* one slice of onions left in rings
* EVO for sauteing

-- Take all the seasonings and mix it well with the chickpea flour. Lightly grease a pan with EVO on medium heat. When hot, coat your tofu slices one each side in the flour mixture and fry for a minute of two on each side until crispy. Place on a paper towel to cool.
-- Mash the avocado with garlic and cilantro. Sautée the onions. Toast the bread. Spread avocado on one side of the bread, place two strips of tofu. Top with onions and a little spicy mayo. Top it with the other bread, cut it in half and eat. :)

Things I used to hate that I'm now semi-gay-obsessed with:

1. Bananas
They're mooshy, which is nasty, and they're my least favorite flavor of runts. Fortunately, they taste nothing like runts and I want to eat them like cookies, now.

2. Tofu
Tofu is also mooshy and disgusting. I guess the theme of this is -- "Tracy now likes mooshy things". But it's so versatile and I couldn't live without it.

3. Spinach
People now say spinach isn't really as good for you as they thought. Some decimal point conspiracy that I can't find any news on. Either way, I thought it was nasty and grainy and leafy-- but I eat it almost every day now. It's great sauteed with pretty much anything. Or as a salad. I've grown leaps and bounds, really.

-- I just had to tell you about my new obsessions since becoming vegan. Nothing hits the spot like a tofu taco, or spinach salad, or a big ass banana. I had a strange experience yesterday where I wanted chips REALLY bad, but instead I ate a banana and it was like the best thing I ever ate. And to explain the title Vegans are deadbeats? -- a coworker called Andrew [[it was in good humor]] a deadbeat for his vegan lifestyle. I guess I couldn't wrap my head around why a vegan would be considered a deadbeat, even in a joke? Staying fit and caring about the environment and animals while not getting fat from beer and hard liquor should make you awesome! I don't think deadbeat when I hear vegan. Do you?
Posted by Unknown at 10:38 AM