Andrew and I took a day trip to the bay area to visit my former home, Berkeley, and to hit up the SF MOMA. We went to our old spot, Herbivore, and got an old favorite-- the grilled "chicken" sandwich, with some healthier alterations. We used to do it with a side of macaroni salad and with the sandwich on focaccia bread. But this time we got a side of seasoned potatoes [[to avoid the white flour in the noodles]] and on whole wheat bread. Then, as an appetizer we got their TVP tacos with guacamole and sour cream. All extremely delicious. 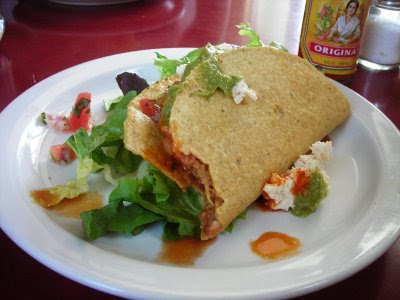 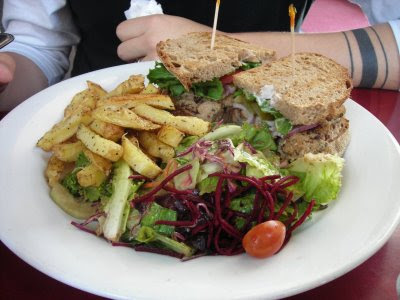 It was sort of surreal to hang out in the town I used to live in while I went to UC Berkeley. We sat in the same seat where we had our first official date, too.

After we ate, we took the BART over to San Francisco and saw some amazing art at the SF MOMA. The whole time I was in Berkeley, I never managed to get over there and check it out. I was glad we finally did. Then, we went to Peet's Coffee. I think it's only in the west coast, because I've never seen it outside Cali, but they often have vegan pastries [[It was founded in Berkeley, too!]]. So, we got a couple vegan oatmeal cookies [[definitely not regiment approved, but like Andrew's mom likes to say, "It's vacation!"]] and a big ass glass of soy milk. 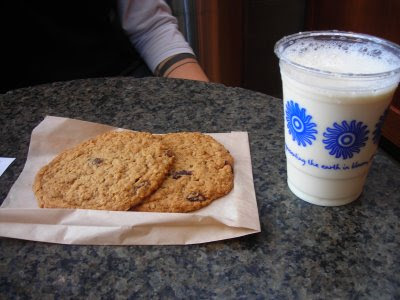 I love the bay area for the art and vegan food. The weather is generally awesome, and the people are laid back. Going back there after living in Ohio, though, makes see how hard everyone tries. Everyone tries really hard to be fashionable, and they all probably struggle to make ends meet in one of the most expensive places to live in the world. Our shitty two bedroom was over $1,700 a month when we lived there. And the people who can afford to live there are wealthy snobs in my opinion. They add no culture. In spite of it all, at the end of the day, I love it there.
Posted by Unknown at 8:40 PM