Being Vegan Makes You Hard

Ok. That was a raunchy title. But it's true!

Planet Green posted an article today claiming that a vegan diet improves blood circulation [[none of that artery clogging meat!]] and reduces your risk of erectile dysfunction. [[read more]] Most vegans are leaner, too, which is going to make it easier for you to want to get it on. You know it's true. Compare: 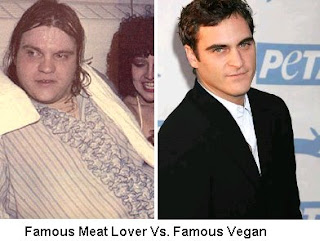 I love this article because it talks about the stereotypes of meat eating. Eating meat is NOT actually macho. I'm pretty sure Phoenix trumps Meatloaf in the macho battle. At least on looks alone [[at least before Phoenix went off the deep end... but that's manly? right?]]

So next time your dad tells you your a pussy for being vegan, just tell him, "At least I can still get it up." BOO-YA!
Posted by Unknown at 12:28 PM

All vegans / vegs I know are lean and look healthy...while the average American meat eater is obviously a disaster. btw I ran across a great site to help men become a vegan being.