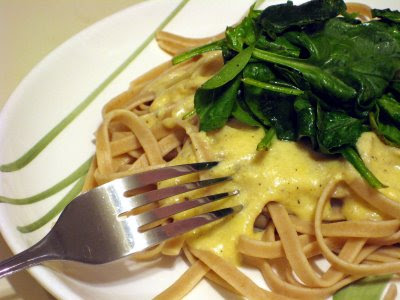 When I was little, my younger sister and I would make boxed pasta-roni fettuccine alfredo a lot. My sister would always want me to put on a fake cooking show, and pretend I was making some amazing, extravagant plate of food -- when really it was water, noodles, and a seasoning packet. I think she just really liked the stupid, fake Italian accent I would do. I'd add random stuff from our cupboard to it, and it would turn into the strangest concoction that we ate anyway. The point being, I never felt more like a chef [[in my own mind]] as when I was making boxed pasta-roni for my little sister. I don't think any one will watch me cook with that much enthusiasm again.

Last night, trying to create a vegan alfredo sauce, that same "random" feeling came over me. What's the best way to replace a white cheese? I found myself pulling out anything I could find in my cupboard [[complete with random, fake Italian accent in my mind... I'm truly a nerd]]. And what I came up with, I found to be pretty darn close to the alfredo sauce I ate as a kid [[minus my childhood spice combo]]. I don't know how authentic you could call pasta-roni, but I imagine it falls a little short of the real thing. Andrew, who doesn't really understand my love of boxed things, enjoyed it thoroughly as well.

This pasta dish really knocked my socks off, though. The crunchy, creole seitan was a well seasoned substitution for chicken. I think I like it better. I can't really describe the alfredo beyond -- alfredo-y. It's herbaceous and creamy, exactly what you'd want from an alfredo sauce. 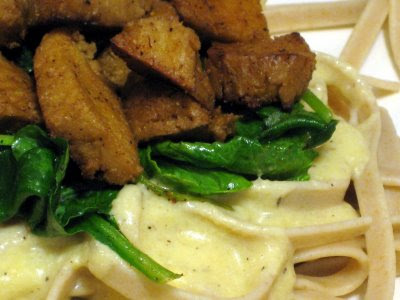 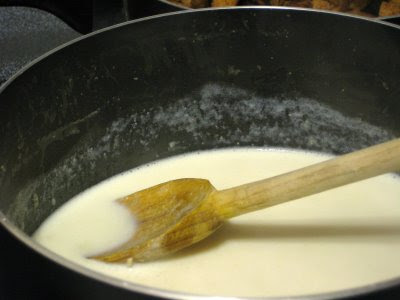 -- Melt butter and cook garlic about 30 seconds on medium heat. Then, add chickpea flour and whisk until a thick paste forms.
-- Add milk and wine, and whisk constantly. Let sit for a minute and allow to thicken. Whisk some more. Let sit again. About 10 minutes.
-- When thickened, remove from heat and add the rest of the ingredients. Whisk together thoroughly. Keep on low burner until ready to serve.

-- Chop up seitan into tiny, bite sized pieces. Lightly season with creole and chili powder. Enough to get them lightly seasoned.
-- Heat on medium heat, 2 tbs olive oil. Add seitan and cook until cripy and browned. 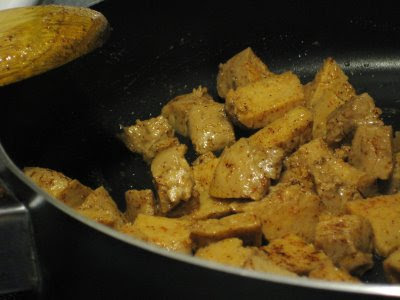 You can see that a couple are starting to get a cripy brown coat, I cooked these anouther 5-10 minuntes after this picture was taken.
Posted by Unknown at 9:14 AM

That looks so delicious!

Nice seitan!! I need to do more seitan recipes...I usually stick to tofu and tempeh.

and ps-yes that crazy anti-fat guy is a little nuts. I don't know why he enjoys spreading his negativity. If you don't have something nice to say...

Thanks for reading-your blog is great!

Oh, man. It looks so good. I drooled when I saw this on the PPK.

I totally agree with you about the "nooch" and "vegan nom noms" business.

Please. There's no call for cutesy. That just brings up the gag factor.

Is there something I can add instead of wine? I'm 18, and my parents probably won't buy me cooking wine as they think I'm just going to drink it all the time :\

That's a good question. I believe there is a section in the grocery store that sells JUST wine specifically for cooking and you don't get carded for it. If you don't want to upset your parents, use some watered down grape juice. It'll be sweet like the white wine so the flavor balance isn't disrupted.

You could also use vegetable broth or more soy milk. The wine is a minor ingredient to begin with.