I don't drink a lot. Maybe once a month, sometimes twice. Everyone knows the freshman 15 is just code for beer belly. And then when you get out of college, it's all down hill from the 15. And I attribute all that to excessive amounts of alcohol. Sure, aging slows your metabolism and you don't have your parents there to tell you not to eat chipotle 3 times a day, but I think it's mostly the beer pong tourney's. Plus, wouldn't being a huge alchy just competely defeat the health benefits of being vegan?

That being said, there are two beers I really like. That's Bud Select and Magic Hat #9. I'm not a super beer guru by any means, but I know what I like. Magic Hat #9 works well with this chili-- it has undertones of apricot that pair well with the smoky chipotle flavor. And you may think, "Wtf Chickpeas?" but they work, too. They're a little harder than the black beans and sausage, which gives it a nice texture contrast. And this recipe is pretty spicy. So, adjust it per your personal Scoville threshold. Or do what I do, and put a buttload of tofutti sour cream on it.


[[Magic Hat Chili]]
I know I said the magic hat works oh-so well with this chili, but if you can't find it, I'm sure any fruity, flavorful beer will work. You all are probably better beer connoisseurs than I am. You'll figure it out. 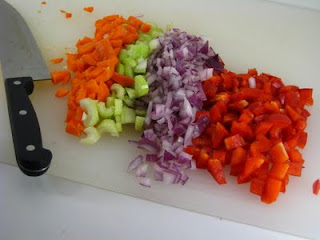 -- Heat oil. Add diced vegetables and garlic. Cook for 2-3 minutes, or until onions are translucent.
-- Add the chili powders, pepper and cumin. Mix with a wooden spoon about 1 minute. Don't over cook the seasoning.
-- Add the beer. Let it simmer for about 5 minutes.
-- Add the drained can of tomatoes and beans. Stir and cook for about 2 minutes.
-- Add the no-chicken or vegetable broth and simmer for about 20 minutes. Add more vegetable broth if it becomes too thick.
-- Once thickened to desired consistency, add the salt, lime juice, and diced/microwaved chipotle sausages. Taste and add more seasoning as necessary.
-- Top with sour cream and onions. Serve with corn bread or garlic bread.


Fun Fact: Andrew has a black cat named Magic.
Posted by Unknown at 10:07 AM