I know, I know-- I'm one of a million bloggers who've tried this recipe and raved about it. But I have to say, if you've never tried these vegan donuts on VeganYumYum, you're really missing out. This is my fourth or fifth time making them, and they've made my life as a vegan just a little bit more complete. Even though we are fortunate enough to have a vegan bakery in our town, they don't offer much variety-- and especially lack my favorites, cheesecake and donuts. Luckily, it's easy to recreate both. 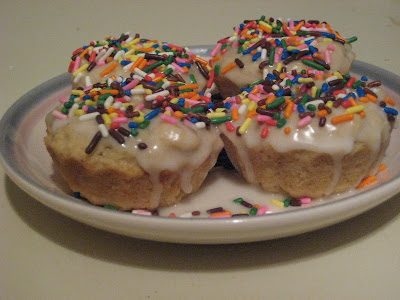 I was a little fearful of making donuts, mostly because I envisioned a really difficult task of baking, deep frying, glazing, and on and on. But this was a basic cake donut- only requiring 15 minutes in the oven and a little stove top heating. I was also worried about having to order some expensive pan online-- but Walmart [[I know-- according the whole progressive agenda, I shouldn't shop there]] had a mini bunt cake pan that worked. I think it gives the donuts a cute detail, too, personally.

My advice about the egg replacer [[veganyumyum doesn't give a specific egg replacer to use]] is to use 1 tbs of egg replacer to 2 tbs of water. The box of Ener-G Egg Replacer [[I purchased mine at Whole Foods]] says to use 1 1/2 teaspoons, but I get a better texture when I use 1 tbs. When you whip it, it should come out more of a thick slush, rather than a runny texture. 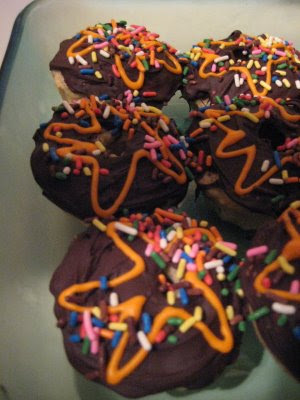 I also added a touch of Halloween to them [[the orange squiggles?]] and brought them into my office Friday.