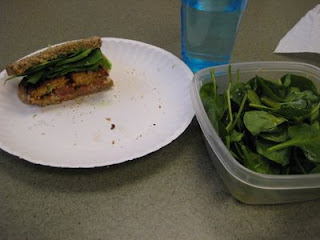 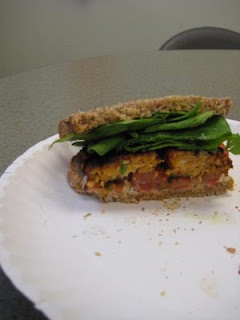 The meal list I post every day is what Andrew is eating and what I'm feeding him, since all this is to get him healthier and more ready for his stunt. While we generally eat the same things, I had to add that I had an Amy's organic enchilada for dinner-- so good! I did take a bite of that chicken salad sandwich, though, and it was amazing. When we looked at the label, it said "Gardein" as an ingredient. I googled it and it turns out it's the faux chicken product used in a lot of fake meat products. Check it out.

Tonight we're going to go see "I Love You, Man" with Paul Rudd. He's pretty hilarious so I'm excited. Whenever we go to the movies I think of that scene in "Six Feet Under", where Lisa says she doesn't go to the movies because the film is made of horse hooves. I don't know if that's true, but it always makes me wonder....
Posted by Unknown at 9:01 PM

Email ThisBlogThis!Share to TwitterShare to FacebookShare to Pinterest
Labels: the regiment

Hi how are you? I was looking through your blog and found it interesting and wanted to leave you a comment.

I have an invitation for you to come and visit my art blog here in San Diego Southern California.

I started this blog in an attempt at finding a creative way to find new friends, and explore my artistic skills through bloging.

I hope you will stop by and enjoy the various labels and music videos I design for my art blog.