Day 7 and Some Amazing Tacos 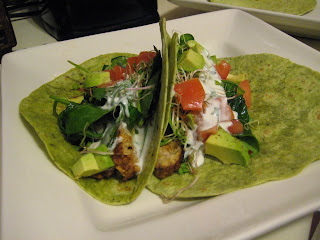 If you love tacos and more importantly, delicious bold flavors, you should try Vcon's Baja Style Tempeh Tacos. Not only is tempeh one of the best things you can eat [[loaded with iron, calcium and protein]], but it's super tasty. I didn't like it much at first, mostly because the texture was grainy and healthy, but if you cook it right, it's delicious! For the tempeh, I opted to cook it in a little EVO instead of peanut oil, because it's a healthier oil and I just think it tastes better. Also, I used Bragg's Liquid Aminos, instead of plain soy, because it's loaded with aminos, of course! And I also used Bud select -- it's a lighter beer, not a Mexican beer. I wish we had an organic one, but I just wanted to use up the left over beer in the fridge. I didn't make the slaw-- instead I used assorted sprouts, spicy spinach [[just spinach in a little EVO with red pepper]], chopped up avocado and tomato, and of course the cilantro lime cream. We used spinach tortillas instead of corn-- less authentic, but probably a lot better for you. Andrew noted that they would be popular in California-- and I think he's right. They're refreshing [[which reminds me of the beach]] and really tasty.

I added a Twitter application below my "about me" section. It blends. I thought I'd point it out. So you can know what I'm doing on a minute by minute basis. It's kind of freaky. But you might like it.

Andrew and I also signed up for a pottery class. I'm excited to maybe make some interesting dinnerware for food shots. I took pottery in high school and college, so it'll be pretty sweet to get into again, and to bring Andrew into it.

Anyways, that's all. Hopefully I'll get time to blog about the tiramisu I made from Candle Cafe's cookbook, and some veganizations I made from Bobby Flay. But it's Kung Fu night, so it's not likely. Until next time...
Posted by Unknown at 1:13 PM

Email ThisBlogThis!Share to TwitterShare to FacebookShare to Pinterest
Labels: cooking, the regiment

this is the greatest vegan blog of all time. When will the entire vegan world realize it?

I so know what you mean when you describe a not-so-appetizing texture as "healthy." We've been damaged by our previous dairy-lovin' lifestyles, I think.

And pottery classes sound fun! Can't wait to hear how they go!

I have two problems.

1, that photo is awesome and I get no credit for it :)

Two, I wasn't kidding when I said this is far and away the best vegan blog on the internet. Why are people not realizing this?