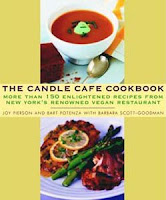 About a week ago, Andrew and I took a trip to Barnes & Noble looking for some healthy cookbooks to help out with the regiment. Instead I found a tiramisù recipe in Candle Cafe's cookbook and had to buy it. I guess it was a farewell dessert before the regiment -- but it was pretty healthy as far as desserts go. It called for only natural/raw sugar and used whole wheat flour. The last and only time I had tiramisù was during my sorority rush sophomore year. I don't remember much about the cake but I did pick that house-- so I probably liked it. :) I did have a problem with this recipe. The "cake" part would not bake all the way through. I know I have my oven temperatures pretty figured out, so it wasn't the oven. It was only supposed to bake 15 minutes, but it was a gooey mess when I took it out. I probably baked it another 30 minutes on top of that. I'm not sure if it was a typo or what, but 15 minutes was not NEARLY enough. Once I got the cake done, it was easy breezy from there. And the end product-- delicious. Not spot on texture-wise, from what I remember and what Andrew says, but the flavors were amazing. If you haven't checked out Candle Cafe's cookbook yet, you should. It has some amazing recipes for dressings, pot pie, tomato bisque, some breads, cheesecakes, and tiramisù of course. 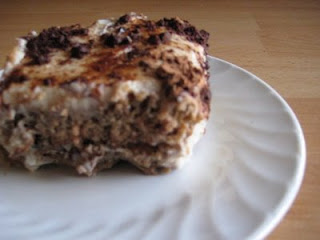 It's a big mess so it's hard to tell, but it's double layered, with a Tofutti Cream Cheese based cream, topped with cinnamon and cocoa powder between layers. And it is to delicious. Really. I'd probably just make this every day and eat it if I could. This and maybe some Baja-style Tempeh tacos.
Posted by Unknown at 4:39 PM