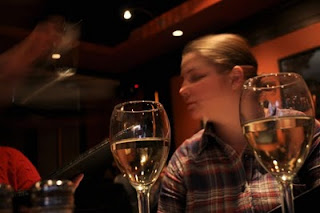 A couple weeks ago Andrew's dad heard about a burger at Matt the Millers Tavern in Dublin called "The Vegan". While the title isn't the most clever name ever, I have to applaud them for their directness. If you're ever wondering if a restaurant has any vegan options, it's nice to see it clearly labeled.

Anyway, this was our first time going to MTMT and from our office, it's way the heck out in BFE. But we were excited and eager to find some new vegan far in the Columbus area. The standard restaurant rotation can get kind of tired -- Qdoba, Aladdin's, Taj Palace, Mad Mex. All good places, but some variety is nice.

I guess the first thing I should note is the ambiance. It's a very nice looking, clean, modern tavern. It has a large restaurant area and a pretty sizeable bar. On the Friday night we went, it was busy as heck, too. I think we had a 40 minute wait, with nowhere to sit in the bar. So plan to wait around a while during prime hours, or get in there early before the after-work crowd. When we were eventually seated, our waiter was friendly and knowedgable. And because we are the way we are, we double checked to make sure "The Vegan" was in fact vegan and not just a silly name. It is. As was the hummus and pita appetizer. 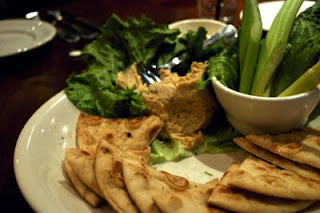 The hummus and pita appetizer was deliciously amazing, as to be expected. I haven't met a brand of hummus I don't love. And while the white flour pita is the bane of my existence [[because of the white flour]], they were still fluffy and soft. 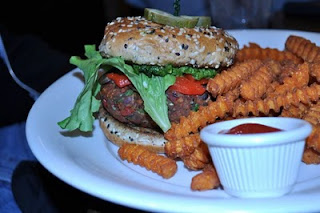 gy sometimes, but when you use the crinkle cut, it keeps them crunchy. The burger itself had a lot going on. The cilantro pesto was strong, so if you don't love cilantro, I wouldn't get this burger. But it really helped to lubricate it since it lacked cheese and condiments. The mushrooms were good, but I may ask for extra next time since they were sparse. The patty was a little mushy [[as so many vegan burgers end up]], but it packed a lot of flavor. The whole wheat bun made it all the better, too. Check them out next time you're in Dublin. It has great food for omnivores, as well.
Posted by Unknown at 10:33 AM

I've never heard of this place. Those fries look amazing!

That sounds pretty tasty. I like pesto made with things other than basil (case in point: my favorite is one done with kale and almonds) so that seems right up my alley.

Check out this informative and inspiring video on why people choose vegan: http://veganvideo.org/

Those sweet potato fries do look amazing. And that burger looks good too :) Im always looking for a tasty vegan burger

I had no idea this place existed. Next time I am out that way I am gonna have to stop in there. Thanks for sharing this information.

We've been a few times but have sadly been disappointed in the food lately. However your version of the hummus plate looks amazing! Ours was a little oily when we ordered it. It's close by to us and the wine pours are very reasonable. Had the sweet potato fries and loved them! :)